Directions:
Study the following table and answer the questions based on it.
Number of Candidates Appeared, Qualified and Selected in a Competitive Examination from Five States Delhi, H.P, U.P, Punjab and Haryana Over the Years 1994 to 1998.

Question:
In the year 1997, which state had the lowest percentage of candidates selected over the candidates appeared?

Correct Answer is Option B):
Punjab

Explanation:
The percentages of candidates selected over the candidates appeared in 1997, for various states are: 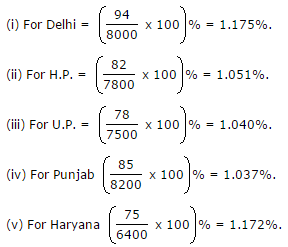 Clearly, this percentage is lowest for Punjab.